Yes, the site is ugly. If I had any design talent, I would draw anime, not write a blog in my underwear.

22 Episodes. Bleak Sci-fi Thriller which explores deep themes and more than earns the mature content warning for violence and dark themes. Availble on Hulu and Amazon DVD. Aired in 2003.

Texhnolyze is good, really good. Look somewhere else for lighthearted fun to brighten up a dark day, but if you are looking for a bleak, intelligent sci-fi thriller that neither promises nor delivers happy endings, Texhnolyze will spend a week making you equal parts depressed and contemplative. 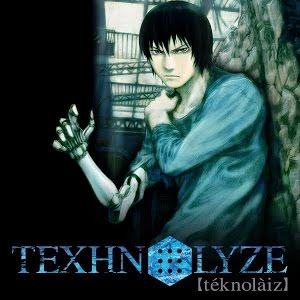 Texhnolyze is very deliberately paced. At the beginning, this means it is VERY slow, and if you find it difficult to appreciate the sheer visual poeticism that imbues every frame and the incredibly skillful sound direction that amplifies the suffering and despondence of the first eight or so episodes then you should should give this show a skip. Aesthetically and thematically this show invites comparisons to Blade Runner, though with a post-apocalyptic sensibility to compensate for the lack of noir stylings. The middle episodes are both the most normal and the weakest, and if you start watching at episode 10, you might confuse this with just another gritty mob show. That is, until the ending sequence where the pacing slows again, as if admitting that the viewer is going to need a little bit of time to piece together flashbacks, hallucinations, and the overall strange environment of the world above ground.

The real pacing problem comes between story arcs. There are three overall arcs, Ichise's recovery, the civil war, and the grand finale. Each of these is compelling of itself, but especially as the civil war transitions into the grand finale the show starts to lose itself for a bit and I, personally, began to worry that it would not live up to its potential.

But it does, so no worries there.

The underground city of Lux, though until pretty far into the show it just looks like it is starkly animated and the whole underground thing is only in evidence by the occasional reference to the above ground world. Lux is at heart a mining community dedicated to extracting the mysterious and important Raffia, a necessary substance in the process of Texhnolyzing, or sticking robotic prosthesis on the astonishingly large number of people who seem to have misplaced their limbs, as well as being exported above ground for unclear purposes. Lux is in a state of semi-anarchy, ruled by the yakuza clan Organo, who are to various degrees opposed by the cultish luddite Union and the biker gang/anarchist collective Racan. There is also the smaller and older nearby town of Gabe, though their game is kept pretty secretive until the end, even after you think you know what is going on.

The world as a whole feels post-apocalyptic, though it would be more accurate to say that the world has simply grown tired in the manner of King's Dark Tower universe. The animation keeps the people, even the people with robot limbs, grounded in reality, and the scenery is rendered with an evocative minimalism that is full of run-down character.

On the other hand, while we are dealing with a fairly alien world, there is almost no exposition. There is literally nothing until the middle of the show has some exposition about what Raffia is, and then through flashbacks at the end. But a whole lot of the world building is done very subtly, and the viewer that picks up on it will have a much better time than one that misses it, but you should also be aware that a whole lot doesn't get foreshadowed, and a number of players remain ciphers through whole thing, and that this is intentional.

Our "hero" through the show is Ichise, a former prize fighter who loses his arm and leg when he angers a higher-up in the Organo. His suffering in both losing the limbs and being forced into new limbs occupies the first third of the show. In this first third he plays a strong, silent type to a degree rarely seen in anime. I think he has a single intelligible line in episodes one through ten, though he does a lot of moaning and heavy breathing. He meets Onishi, a charismatic yakuza boss, and plays Enkidu to the latter's Gilgamesh, hewing closely enough to the Babylonian tale that I feel safe in assuming it to be an intentional parallel.

This is a tremendously intelligent show that ably concerns itself with issues of life and death, civilization and self-reliance, and raises Ship of Theseus style questions. Unlike many tales, Texhnolyze uses copious robotic parts to explore these issues not in the extreme, but by taking small steps up and down the ladders of death and dependence. This also provides possibly the most chilling foot soldiers in anime, or indeed of any show, the Shapes. And then, when you ask yourself why the Shapes are terrifying, you have to ask yourself why Ichise and Onishi are not terrifying, at where people come too close to dead, too dependent on the support structures that Texhnolyzation requires. I still don't have an answer that leaves me comfortable.

Perhaps because of this, this is a show without heroes. Certainly it follows Ichise and gives him a bit of a heroic arc, but even in the context of the show it is hard to call him the good guy. Plenty of "shades of grey" shows (speaking about moral content, not spanking) end up with a pretty "white" character, but this one really does cast the souls of its characters in a uniform ashen hue.

These themes are accentuated by visual and thematic symbolism running throughout the show. To avoid an excess of spoilers, I will simply tell you to be on the lookout for flowers and incomplete bodies (both severed limbs and bodies missing limbs).

This is one of those shows about which books could be written. I think the only reason you don't hear about it alongside other sci-fi gems like Ghost in the Shell and Evangelion is that it can be very slow at times and perhaps mass audiences aren't looking for poetic musings on the progressions toward death. This show is not funny, has no fan service, and ends on a fairly dark note.

This show is deep, intelligent and masterfully executed. It demands your engagement just to understand what is going on, and then holds that engagement as you recoil in horror from what is going on. Highly recommended when you are in a sober mood looking for something a little smarter and darker than the usual fare.

After watching this, Darker than Black is a nice way to get your expectations lowered. A similar protagonist, but not as dark or complex and much more of a conventional action anime, though still enjoyable. If you would instead prefer to move a step more abstract, Serial Experiments Lain is by some of the same people and has a cyberpunk feel more in the Matrix tree than the Blade Runner tree.

Purely from how much I enjoyed it, I give Texhnolyze a solid 8/10.
Posted by entirelyalive at 3:19 PM


And I elaborate on these shows here.

More to be added as I remember them.